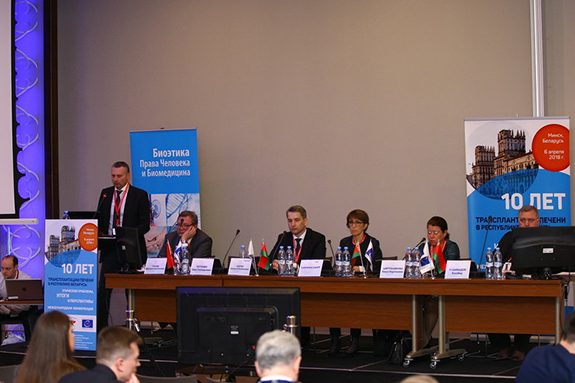 International Conference: 10 years of liver transplantation in the Republic of Belarus

Technical organizer of this event was the company “Go Bel Tur”.

The programme of the Conference contained presentations on international standards in the field of organ donation and organ transplantation, including the Oviedo Convention, case-law of the European Court of Human Rights, relevant principles of the World Health Organisation, ethical challenges, fight against trafficking in human organs and exchange of relevant good practices in transplantation systems in Belarus and in other countries.

More than 50% of organ and tissue transplantations were performed by the surgeons of the Republican Scientific-Practical Centre of transplantation of the 9th Clinical Hospital in Minsk.

Transplantations of kidney were also held in Brest, Gomel, Grodno, Vitebsk and, in the beginning of 2018 – in Mogilev. Paediatric transplantation of liver and kidney is continuing to develop.

The success of transplantation is directly linked to the development of donorship. In 2017 organs and tissues were removed from 224 effective deceased donors (23,6 removals per 1 million of population). PHOTO REPORT FOLLOWING THE RESULTS OF THE CONGRESS